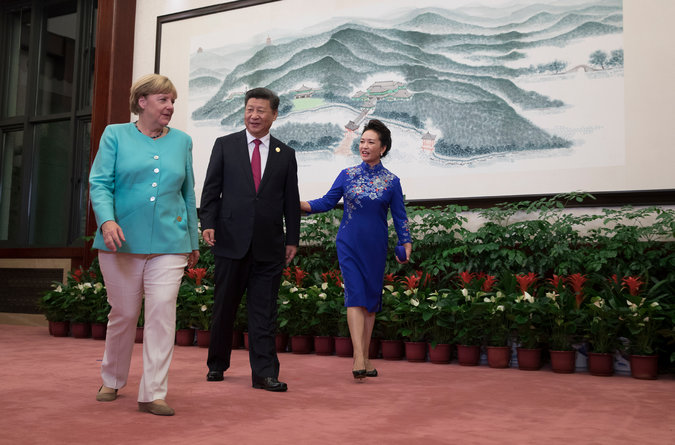 With Trump threatening punitive tariffs on Mexican and Chinese imports, some US allies are shifting focus to other potential friendships and sources of trade. German Chancellor Angela Merkel with Chinese President Xi Jinping and his wife, Peng Liyuan, in September

“America’s traditional allies are on the lookout for new friends.

They have heard the mantra “America First” from the new president,

and his apparent esteem for the Russian president, Vladimir V. Putin.

In Asia and Latin America, leaders have absorbed the deepening possibility that

Trump will deliver on threats to impose punitive tariffs on Mexican and Chinese imports,

provoking a trade war that will damage economic growth and eliminate jobs around the world.

Some allies are shifting focus to other potential partners for new sources of trade and investment,

relationships that could influence political, diplomatic and military ties.

Many are looking to China, which has adroitly capitalized on a leadership vacuum in world affairs

by offering itself — ironies notwithstanding — as a champion for global engagement.

“We’ve always said that America is our best friend,”

Jeroen Dijsselbloem, president of the Eurogroup —

said in an interview with NYTimes on the sidelines of the World Economic Forum in Davos, Switzerland, this month.

“If that’s no longer the case, if that’s what we need to understand from Donald Trump,

then of course Europe will look for new friends.”

“China is a very strong candidate for that,” he added.

“The Chinese involvement in Europe in terms of investment is already very high and expanding.

If you push away your friends, you mustn’t be surprised if the friends start looking for new friends.”

On Wednesday, Chancellor Angela Merkel of Germany spoke by telephone with Premier Li Keqiang of China.

“The two spoke in favor of free trade and a stable world trade order,”

a German government spokesman later said in a written statement.

The swift reassessment of trade relations —

only amplifies the potential for a shake-up of the broader geopolitical framework.

calling into question the alliance that has maintained security across much of Europe for more than six decades.

by taking a congratulatory call from the president of Taiwan, the self-governing island that Beijing claims as part of its territory.

In shutting American borders to people from predominantly Muslim countries,

Through the fractious campaign, weary sophisticates dismissed the extreme talk from the Trump camp as political bluster.

Even if he won, he would never follow through on his threats, particularly in trade where his business sensibilities would prevail.

But that conventional wisdom looks to be crumbling.

First, Trump delivered on a promise to withdraw from the Trans-Pacific Partnership,

a trade agreement forged by the Obama administration in part as a counter to China’s growing influence.

Then, on Thursday, his administration appeared to embrace a Republican proposal to impose a 20% tax on all imported goods

while asserting the proceeds would pay for a wall along the Mexican border.

resonating as the potential first salvo in a trade war.

“I’m incredibly concerned the Trump people mean what they say,”

“One would hope that they are using this as a negotiating tactic. But even if you are,

because, right now, the communication to the world is not flowing clearly” …

Within the business world, the prospect of substantial tariffs seems so damaging that many assume it will never happen …

Most experts have assumed the responsibilities of governance would temper Trump’s trade posture.

Given that nearly one-third of all American trade is conducted with China and Mexico, a rupture risks severe economic damage.

The three countries are intertwined in the global supply chain.

China makes components that go into auto parts manufactured in the United States.

Those parts are delivered to factories in Mexico that produce finished vehicles sold to Americans.

Calling such vehicles Mexican imports misses that much of the value is produced in the United States, employing American labor.

“The idea of trade wars these days, what politicians have in mind is really a 19th-century or early 20th-century conception of trade,”

said Gianmarco I.P. Ottaviano, a trade economist at the London School of Economics.

“You don’t even know who you’re going to hurt with these kind of things.

Beyond the economic effects, Trump’s refashioning of trade has already altered global alignments.

In emphasizing “America First,” Trump has generated a widespread sense that the country is surrendering its global leadership position.

a period of international integration has devolved to a new era in which nationalist concerns are paramount.

On Friday, as Trump hosted British Prime Minister Theresa May, he only increased the sense that he disdains Europe.

“Brexit’s going to be a wonderful thing for your country,”

he told May at a news conference, before recounting his frustrations with the union’s bureaucracy.

“Getting the approvals from Europe was very, very tough.”

China is working to assume the mantle.

to submit his nation’s bid as a reliable champion of expanded trade.

China does not have free elections. China jails labor organizers, while lavishing credit on state-owned enterprises.

All of this makes Xi an ironic choice as an icon for free trade.

Yet Xi’s speech was so successful it won the embrace of business people and world leaders alike.

At a lunch in Davos two days after Xi’s address,

stood in a dining room full of more than 100 people and predicted the dawning of a new era.

“We heard a Chinese president becoming the leader of the free world,” he said.”