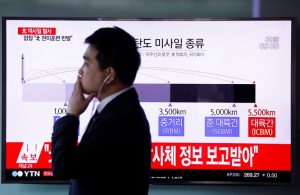 The launch prompted South Korean security officials to call for

the early deployment of an advanced American missile defense system — one that has provoked and upset China.

The missiles took off from Tongchang-ri, in northwest North Korea,

and flew an average of 620 miles before falling into the sea between North Korea and Japan,

The type of missile fired was not immediately clear, but Noh said

it was unlikely that they were intercontinental ballistic missiles,

which the North had recently threatened to test launch.

During a meeting of the National Security Council, Hwang Kyo-ahn, the acting president of South Korea, called for

The US and South Korea have agreed to complete the THAAD deployment within the year.

They say it is meant to protect South Korea and American military sites there from North Korean missiles.

But China says THAAD would undermine its own nuclear deterrent

Hwang also called on his government to look aggressively for “ways to effectively strengthen the US’ extended deterrence” for South Korea,

referring to Washington’s ability to deter attacks on its allies with the help of its nuclear forces.

Hwang did not elaborate, but his comment came days after The New York Times reported that

including the possibility of reintroducing nuclear weapons to South Korea as a bold warning.

“If North Korea gets a hold of nuclear weapons, its consequences are too horrible to think about,” Hwang said.

In his New Year’s Day speech, the North Korean leader, Kim Jong-un, said his country was in the “final stage” of preparing for its first ICBM test.

but North Korea has said it is ready to test launch an ICBM.

The North’s missile launching came as the United States and South Korea were conducting their annual joint military exercise.

North Korea calls such drills a rehearsal for invasion and has often responded by conducting missile tests.

On Thursday, the North Korean military called the joint exercise a drill for “nuclear war” and vowed to take unspecified strong measures.

“New strategic weapons of our own style will soar into the sky.”

North Korea has boasted of an ability to strike the continental United States with a nuclear-tipped missile.

It has never tested a missile capable of flying across the Pacific,

although it has displayed what outside analysts said were ICBMs during military parades in recent years.

Strong doubt also remains over the North’s claim that it can manufacture a nuclear warhead small enough to be fitted onto such a missile.

But its test on Feb 12 demonstrated its advancing ballistic missile technology.

which the North said can carry a nuclear warhead.

over its inability to halt or contain North Korea’s nuclear ambitions with punitive economic sanctions.

the country’s leaders had developed an international smuggling network to foil the sanctions and outmaneuver enforcement measures.

The report described a matrix of North Korean companies with bogus identities used to accrue cash, technologies and materials for the government’s weapons development.

the missiles appeared to have fallen into the sea in an exclusive economic zone around Japan.

“extremely problematic behavior from the viewpoint of security of aircraft and ships.”

He said the government had protested to North Korea.

“We just cannot accept such repeated provocations,” he said.