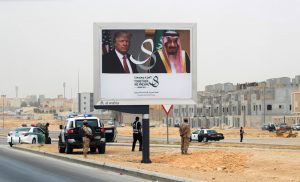 “Anti-Shia coalition masquerading as Middle Eastern security alliance will fuel sectarian fires & produce more, not less, terrorism. Second, Arab “partners” will likely use so-called anti-ISIS coalition to go on the offensive,  dragging US into new misadventures in the Middle East. Exhibit A: counterproductive Saudi campaign in Yemen against Shiite Houthi rebels, whom they see as Iranian proxy. Two years and countless civilian casualties later, Saudis still at it, w US torn between backing “ally” and being complicit in fiasco that’s also leaving a power vacuum – one filled by Islamic State and Al Qaeda in the Arabian Peninsula. Third, while Trump expects a Middle Eastern coalition to leverage the Arabs to do more, they will want to use it to deepen US military engagement in the Middle East – while doing as little as possible themselves.” Here, a billboard in Saudi Arabia featured Trump and Salman bin Abdulaziz Al Saud, the King of Saudi Arabia, during Trump’s Middle East tour in May.

“Tweeting first and asking questions later is not a good way to make policy — especially in the Middle East.

In a recent salvo, Trump took “credit” for a decision by one set of US partners — Saudi Arabia, Egypt and the United Arab Emirates — to sever relations with another, Qatar.

It risks deepening a spat that could undermine the fight against the Islamic State.

And it highlights the fragility of a proposed Middle Eastern alliance Trump touted as the major achievement of his first foreign trip.

These countries have long been at odds over Qatar’s relationships with Iran, the Muslim Brotherhood and Hamas … as we noted on June 13:

Qatar fancies itself a bridge to all three; however objectionable their conduct, they are not going away and need to be engaged.

The Saudis, Emiratis and Egyptians see Qatar as an enabler of extremists, providing them financial support, political backing or the region’s most powerful megaphone, the Al Jazeera television network.

Qatar hosts one of the most important United States air bases in the Middle East:

Al Udeid, home to about 11,000 service members in the anti-Islamic State coalition, most of them American.

Coalition planes flying from that base lead the air campaign to defeat ISIS.

But Trump’s unconditional support for the Saudis during that same visit also seemed to embolden them:

to not just break relations with, but also impose an economic blockade on, Qatar.

His tweets taking credit for the move left the Qataris reeling. 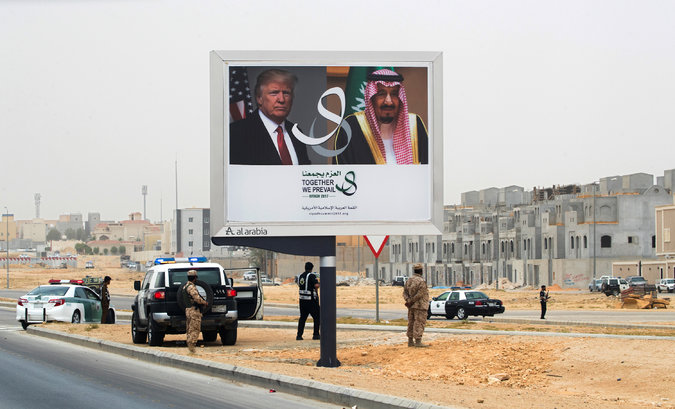 After Secretary of Defense Mattis and Secretary of State Tillerson rushed to the White House to explain the stakes, Trump appeared to reverse gears.

He pressed the Saudi and Qatari leaders to address their differences directly and emphasized the importance of a united front in fighting the Islamic State.

American diplomacy seemed to be firing on all cylinders.

Until, that is, Trump used a press conference with Romania’s president earlier this month to unleash another volley,

accusing Qatar of financing terrorism “at a very high level” — and throwing a wrench into his own diplomatic works.

If all of this seems confusing, consider this:

the Trump administration says it wants to create a military coalition of Arab states, led by Saudi Arabia, to fight Islamist terrorism.

It was as if Trump was trying to break his own alliance, described as an “Arab NATO,” before it had even formed.

If he was, perhaps it was for the best.

The administration is right to want the Arabs to take more responsibility for the fight against the Islamic State and, more broadly, for their own security.

But a series of contradictions at the heart of the proposed alliance almost guarantee it will be a mirage.

First, where Trump sees an alliance united against extremism, the Saudis see a Sunni coalition that will roll back Iran.

This could potentially pull the United States into the sectarian struggle between Sunni and Shia.

Beyond that, Saudi-exported, ultra-conservative Wahhabism, which breeds intolerance around the world, is no less dangerous to Western interests

than Iran’s support for radicalism, regional meddling and expansionism.

An anti-Shia coalition masquerading as a Middle Eastern security alliance will only fuel those sectarian fires and produce more, not less, terrorism.

Instead of taking sides in that conflict, Washington should press Riyadh and Tehran to stop feeding it.

Second, whereas our core alliances in Europe and Asia are defensive,

our Arab partners could use the anti-Islamic State coalition to go on the offensive,

dragging the United States into new misadventures in the Middle East.

Exhibit A is Riyadh’s counterproductive campaign in Yemen against the Houthi rebels, whom they see as an Iranian proxy.

I was the first senior American official to meet with Riyadh’s dynamic Deputy Crown Prince Mohammed bin Salman after the Saudi intervention in Yemen in 2015.

I reiterated the United States’ commitment to defend Saudi Arabia against Houthi aggression and to help press the Houthis back to the bargaining table.

Then I asked him Saudi Arabia’s objective in Yemen itself.

“To remove every last vestige of Iranian influence,” he responded.

Two years and countless civilian casualties later, the Saudis are still at it, with Washington torn between backing our ally

and being complicit in a fiasco that’s also leaving a power vacuum,

one filled by the Islamic State and Al Qaeda in the Arabian Peninsula.

Third, while Trump expects a Middle Eastern coalition to leverage the Arabs to do more,

they will want to use it to deepen US military engagement in the Middle East, while doing as little as possible themselves.

Trump’s “frustration” with NATO allies in Europe over burden-sharing will pale in comparison to what awaits him in the Middle East.

are risk averse, fearful of reprisals and divided in their priorities.

They will spend more on weapons but are unlikely to use them effectively against the Islamic State.

Finally, NATO itself is more than a coalition of common interests —  it’s an alliance of shared values.

Trump seems more at home with Middle Eastern autocrats than he does with European democrats.

Interests change and diverge; values do not.

In their absence, an “Arab NATO” will prove to be a hollow enterprise.”

V.O. Antony J. Blinken, a managing director of the Penn Biden Center for Diplomacy and Global Engagement, was a deputy secretary of state in the Obama administration.