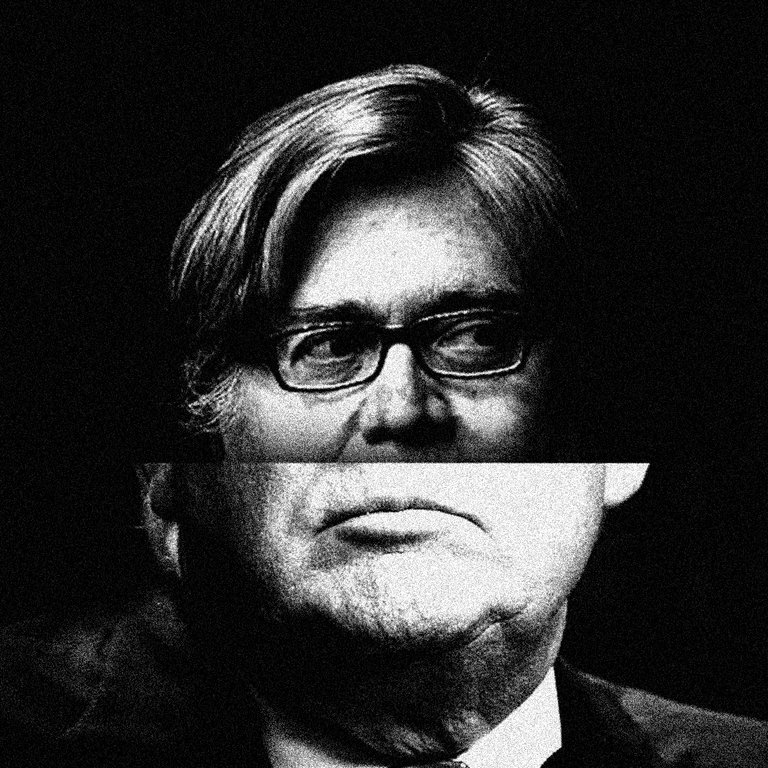 Bannon already seems to have surpassed Karl Rove as the most dangerous political Svengali alive today – and his boy is just getting started. As a result of his vicious and self-destructive policies, he is destroying Trump’s credibility completely. Consequently, Angela Merkel is now the unquestioned leader of the positive forces in the Western world. Let’s hope she can stop Trump before he does, in fact, blow everything up … and we mean EVERYTHING …

Plenty of presidents have had prominent political advisers, and some of those advisers have been suspected of quietly setting policy behind the scenes –

recall Karl Rove, aka “Bush’s Brain” or, if your memory stretches back far enough, triangulatin’ Dick Morris for the early Clintons.

nor have we seen one do quite so much damage so quickly to his putative boss’s popular standing or pretenses of competence.

Bannon supercharged Breitbart News as a platform for inciting the alt-right,

did the same with the Trump campaign and

is now repeating the act with the Trump White House itself.

That was perhaps to be expected, though the speed with which President Trump has moved to alienate

Trump never showed much inclination to reach beyond the minority base of voters that delivered his Electoral College victory,

and Bannon, whose fingerprints were on each of those initiatives, is helping make sure he doesn’t.

But a new executive order, politicizing the process for national security decisions, suggests

Bannon is positioning himself not merely as a Svengali but as the de facto president.

In that new order, issued on Saturday, Trump took the unprecedented step of naming Bannon to the National Security Council,

along with the secretaries of state and defense and certain other top officials.

that he barred Rove, Bush’s political adviser, from N.S.C. meetings.

sat in on some N.S.C. meetings, but he was not a permanent member of the council.

which includes most of those same top officials and meets far more frequently.

the chairman of the Joint Chiefs of Staff, a role now held by Gen. Joseph Dunford Jr., and

the director of national intelligence, the job that Dan Coats,

a former member of the Senate Intelligence Committee and former ambassador to Germany,

has been nominated to fill.

can make a real difference in decisions.

Trump has not simply broken with tradition but

has embraced the risk of politicizing national security ,,,

but “only where issues pertaining to their responsibilities and expertise are to be discussed.”

Could there be any national security discussions when input from the intelligence agencies and the military will NOT be required?

People in those jobs are often the ones to tell presidents hard truths, even when they are unwelcome.

As his first week in office amply demonstrated, Trump has

He needs to hear from experienced officials, like General Dunford.

But Bannon has positioned himself,

as the president’s most trusted aide,

shutting out other voices that might offer alternative views.

he would be wise to reconsider allowing him to run his White House,

particularly after the fiasco over the weekend of the risible Muslim ban.

Bannon helped push that order through

or even seeking deliberation by the N.S.C. itself.

The administration’s subsequent modifications, the courtroom reversals and the international furor

have made the president look not bold and decisive but simply incompetent.

As a candidate, Trump was immensely gratified by the applause at his rallies for Bannon’s jingoism.

and damaging the presidency.

Presidents are entitled to pick their advisers.

that he needs advisers who can think strategically and

Imagine tomorrow if Trump is faced with a crisis involving China in the South China Sea or Russia in Ukraine.

Will he look to his chief political provocateur, Bannon, with his penchant for blowing things up —

or will he turn at last for counsel to the few more thoughtful experienced hands in his administration,