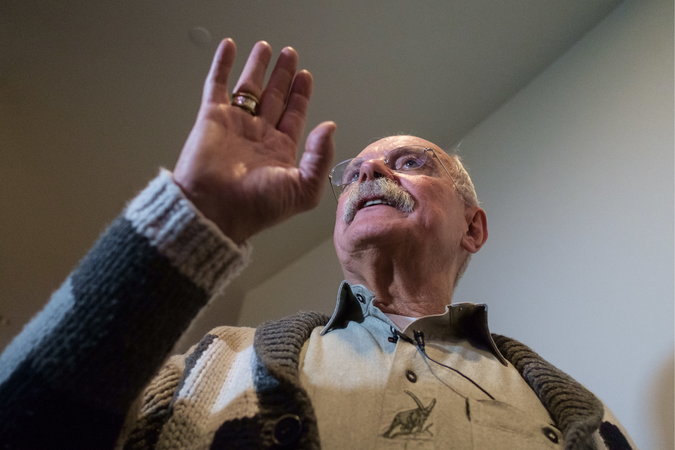 Nikita Mikhalkov, in standard “strong leader” shot, from below … In Moscow, cars with bumper stickers proclaiming “To Berlin!” and “We can do it again!,” crude allusions to World War II.

“Head of the Russian cinematographers’ union, Nikita Mikhalkov is a well-known actor and director and a powerful figure in the world of Russian culture.

His father was a prominent Communist writer and the author of the lyrics to the Soviet national anthem,

and his mother the descendant of the great painter Vasily Surikov.

whose works include big Hollywood productions such as “Tango & Cash.”

For years Mikhalkov has made no secret of his nationalist views and his support for President Vladimir V. Putin, a personal friend:

He was a co-writer on an open letter in 2007 pleading with Putin to remain in office for a third term, in direct contradiction of the Constitution.

the noxious tide of “cultural and intellectual McDonald’s” sweeping the globe.

Mikhalkov retorted, “That’s up to the individual.”

He airs his political ideas on “Besogon TV” (“The Exorcist TV”), a video blog masquerading as a television show.

In a measured tone, he offers his viewers lessons on the age-old perfidy of the West toward Russia.

This is history with an enormous chip on its shoulder.

To listen is to become convinced that Europe and the United States exist solely to torment Russia and plot its ruination.

His image of Russia is that of a besieged fortress under constant threat of attack,

a notion that has been nakedly cultivated by the Putin regime in recent years.

Russia is a “velikaya strana,” a great country, he keeps reminding his audience, a fact the world forgets at its peril.

On a visit to Moscow last spring I saw cars with bumper stickers proclaiming “To Berlin!” and

“We can do it again!,” crude allusions to World War II.

Some Russians, it seems, are ready to repeat it, and this is the sentiment Mikhalkov encourages.

Among the demons singled out for exorcism by Mikhalkov in recent months has been the Yeltsin Center,

An enormous complex with a museum, archive, library and exhibition halls, the center, which opened in November 2015, is dedicated to promoting

“the institution of the Russian presidency and the development of civil society, democratic institutions and the rule of law,” according to its website.

To Mikhalkov, the Yeltsin Center reeks of betrayal to Russia’s political traditions and a wholesale capitulation to the West.

he claims reduces its glorious past to nothing but a series of bloody tyrants and unending misery.

At a committee meeting of the Federation Council, the upper house of the Russian Parliament, on Dec. 9,

at least forcing it to change its educational offerings to reflect his nationalist agenda.

He insisted that the center was carrying out a “destructive program” that was injecting the minds of the country’s children with “poison” and ruining their sense of Russian identity.

It was a matter of “national security,” he said, for by destroying young Russians’ native pride the center was promoting “the collapse of the country.”

This, he warned, is “the dream of the world community.”

He does not mean this metaphorically.

If Mikhalkov’s crusade against the Yeltsin Center were an isolated affair it would not be cause for serious concern,

but the attack is part of a broader campaign to curb the activities of institutions deemed antithetical to the regime and to silence dissent.

In the past two years, Russia has stepped up enforcement of the so-called foreign agent law

forcing either the closing or scaling back of many vital civic organizations,

including the Levada Center, an independent polling agency, and

Memorial, dedicated to chronicling the atrocities of the Soviet past and monitoring human rights in Russia.

Amid this shrinking landscape for open, honest debate and study, the Yeltsin Center,

with its rich program of lectures, exhibitions, screenings and discussions,

has taken on great importance in the country’s civic life.

Source: The Exorcist of Russia – The New York Times