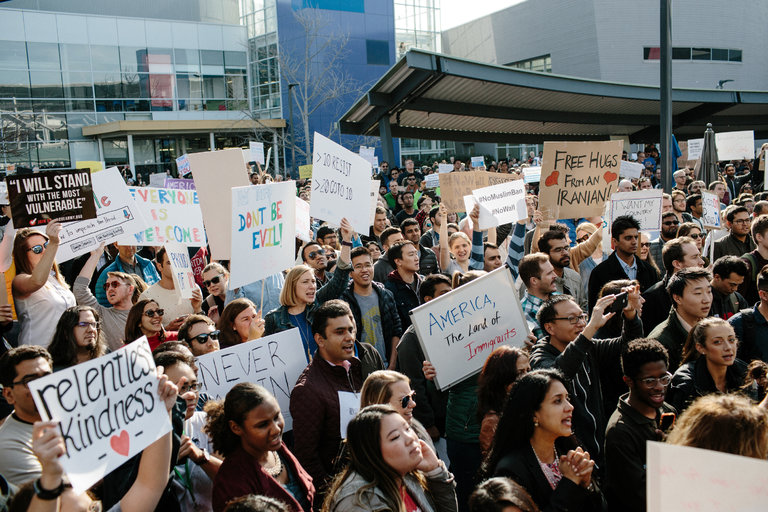 In a court filing, nearly 100 technology companies cited the “tremendous impact” of immigrants on the United States in opposing the Trump immigration ban. Here, a protest outside Google’s headquarters in Mountain View, Calif., last month. Google and other Silicon Valley companies said the ban could hurt the economy.

“In late September, a group of tech leaders started a well-publicized effort to raise $100,000 for Hillary Clinton.

In flush Silicon Valley, that is spare change.

But by the time the election was over, the campaign had pulled in only $76,324.

For all its visceral dislike of Donald J. Trump, the tech community did not worry too much about him being elected or, once in office, carrying through with his program.

Lulled by favorable polls, distracted by its own destiny, Silicon Valley was above all else complacent.

Companies are being pushed by their employees, by their customers and sometimes by their ideals.

They are trying to go far enough — without going too far.

Nearly 130 companies, most of them in the technology field, filed an amicus brief late Sunday in the United States Court of Appeals for the Ninth Circuit,

which declined to reinstate the travel ban after a lower court blocked it.

The brief was signed by an unusually broad coalition of large and small tech companies that included Apple, Facebook, Microsoft, Google, Tesla, Uber and Intel …

“The companies are working on three fronts:

They are vociferously objecting to the Trump policies they think are bad,

they are trying to engage with him to influence his behavior, and

they are developing new technology to work against policies and political discourse they don’t support.”

It is an improvised and complicated strategy.

The companies are among the richest and most popular of American brands, which means they have a good deal of leverage.

Yet they are also uniquely vulnerable — not only to presidential postings on Twitter and executive orders,

but to the sentiments of their customers and employees, some of whom have more radical ideas in mind.

Many of the companies initially placed their bets on engagement after an upbeat meeting with the president-elect in December.

That modest approach, which even the most risk-averse executive can endorse, showed its limits last week.

After widespread customer defections, Travis Kalanick, the chief executive of Uber, was forced to step down from one of the administration’s advisory councils.

“People voted with their feet, and Travis listened,”

said Dave McClure, who runs the 500 Startups incubator and started the Nerdz 4 Hillary group that tried to raise the $100,000.

“We need to hold the other tech leaders accountable in the same way.”

“You don’t have a voice with the president if you didn’t vote for him,” he said.

“But employees and customers have a voice with the tech companies.

Several factors are propelling Silicon Valley to the front lines of opposition to Trump.

Some have been widely noted:

The companies are often founded by and run by immigrants,

which made the executive order on immigration offensive and a threat to their way of doing business.

Tech companies frequently stress the importance of talent from other countries to their businesses.

Less remarked on has been the political homogeneity of tech workers.

“It’s not like you have 60 percent of the employees on one side and 40 percent on the other,”

said Ken Shotts, a professor of political economy at the Stanford Graduate School of Business.

“They all have the same leanings.”

Trump does have some support in Silicon Valley, most notably the venture capitalist Peter Thiel.

Yet another factor pushing the companies is the perennially tight job market in technology.

Executives cannot afford to alienate a large bloc of workers.

Beyond this, there is the mythology of Silicon Valley,

which holds that the work being done there is building a better future.

Google’s former slogan “Don’t be evil” is the most forceful expression of this.

“If you go around making a lot of statements about your exalted role in society,

Since the executive order was issued, the companies have struggled to keep on the same page with their employees.

Twenty-four hours later, it was much blunter, calling the order “misguided and a fundamental step backwards,”

and saying it would create “much collateral damage to the country’s reputation and values.”

At an all-hands meeting at the beginning of the week with the chief executive, Satya Nadella, who was born in India, Microsoft employees expressed their concern.

The company did not file a formal declaration supporting Washington State’s effort to block the order the way Amazon and Expedia did,

The immigration battle is in Microsoft’s self-interest.

Seventy-six of its employees were affected by the order, the company said.

Some in Silicon Valley have more expansive hopes for the tech companies there.

“In 2016, we saw how technology could be used to polarize ourselves to extreme levels,” said Altman of Y Combinator.

“The most important thing we could do is figure out how to use technology to depolarize the nation.”

McClure of 500 Startups said it was ridiculous “for the chief executives of the valley to suggest things like hate speech and bullying speech aren’t solvable problems.

Google has been solving the problem of spam for the last 10 years.

No reason they can’t fix the monetization of fake news.”

On Sunday night, the Super Bowl was in overtime and a dreary winter rain was falling in San Francisco.

That was not enough to deter more than 100 tech workers from showing up for a meeting of a new group, Tech Solidarity,

that hopes to tackle some of these issues from the bottom up.

In each case, numerous hands went up. Under the rules of the meeting, participants were not identified.

It was a very geeky event.

Much of it was a fund-raiser for three legal aid groups that have been working to assist travelers caught in the ban.

The speaker for the Council of American-Islamic Relations was asked what she needed.

She replied that she was having trouble with her customer relationship management software.

“I’ve actually been pretty obsessed with C.R.M.s lately,” said a woman in the audience, volunteering to help.

Ceglowski is a software engineer who runs the one-man start-up Pinboard.

He was visiting the United States in 1981 with his mother when martial law was declared in their native Poland. He is now an American citizen.

Best-known in tech circles as a caustic critic of the large tech companies and their attitude to issues like privacy,

he took on the activist mantle shortly after Trump was elected.

Since then, Tech Solidarity has held rallies in Portland, Ore.; New York; Seattle; Boston; and other cities.

He talked about Facebook’s chief operating officer, Sheryl Sandberg, the author of “Lean In,” which asks women, “What would you do if you weren’t afraid?”

Ceglowski noted that Ms. Sandberg found time to go see Trump, but not to go to the women’s march on Washington.

Ms. Sandberg has said she had a personal obligation that kept her from the march.

When Facebook employees did their own protest last week, he pointed out,

it was done in secret so no one knew about it.

“We have to protest in public,” he said.

Unlike the great Silicon Valley companies, which seemed to blossom overnight,

he said he knew progress here would be slow.

But he was hopeful that some of the attendees were previously apolitical folk who had taken their first steps to engagement.

“I want pressure from below to counterbalance the pressure management is already feeling from above,” he said.

“We have to make sure we’re pushing at least as hard as Trump is.”