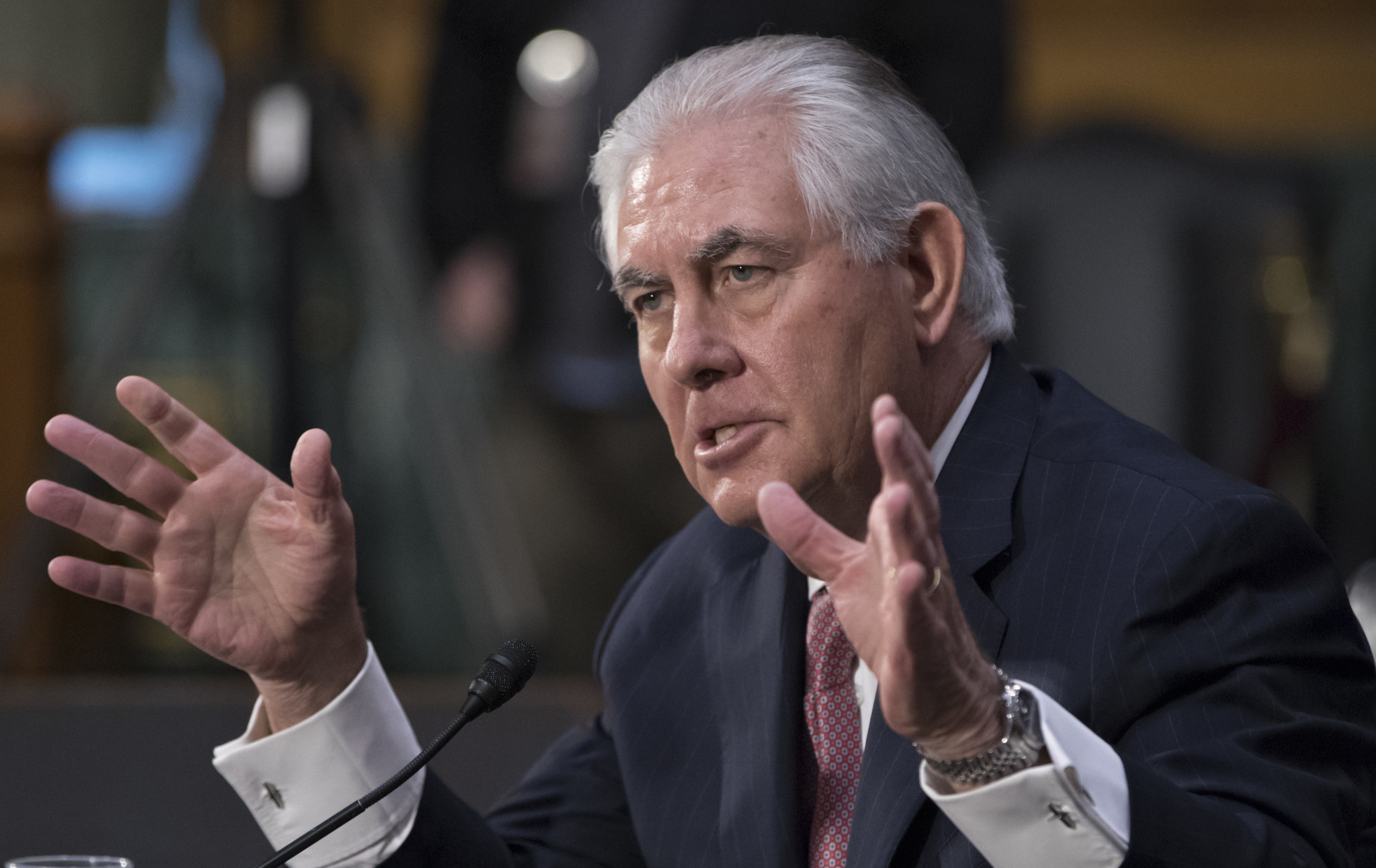 Did Rex Tillerson, Trump ’s choice for Secretary of State, misspeak — or did he intend to take a stand that if implemented could be interpreted by China as an act of war?

Yesterday, we noted how all the players in the DC circus — Trump / his nominees / Senators / media — were blathering on about Russia —

while ignoring China, a country that is much more important to the US — economically / politically / militarily / culturally …

or did he intend to take a stand that if implemented could be interpreted by China as an act of war?

Tillerson said during his confirmation hearing Wednesday that the United States would have to block China’s access to artificial islands that the country is building to assert its claim over disputed waters in the South China Sea.

“This is a threat to the entire global economy, if China is allowed to somehow dictate the terms of passage through these waters,” Tillerson told the Senate Foreign Relations Committee …

Tillerson’s comments had foreign policy experts in the United States and China scratching their heads in befuddlement.

“Unless Washington plans to wage a large-scale war in the South China Sea, any other approaches to prevent Chinese access to the islands will be foolish,’’

editorialized the Global Times, the state-run Chinese newspaper known for its nationalistic views.

Pressed by reporters at a news conference Thursday, China’s Foreign Ministry spokesman Lu Kang declined to speculate about what Tillerson might have meant or how Beijing might respond.

But he defended China’s actions in disputed waters as “above reproach.”

“We hope the U.S. would be upright and unbiased, honor its commitments and stop taking sides on issues of sovereignty,” he told reporters.

Among U.S. Asia experts, the consensus appeared to be that Tillerson — a former chief executive of Exxon Mobil Corp. without diplomatic experience —

had engaged in a flight of hyperbole in keeping with the [insane] rhetoric about China favored by Trump.

People familiar with the confirmation process said Tillerson had not been sufficiently briefed for the hearing.

According to one expert with firsthand knowledge, the Trump transition team had reached out only a few days before for an Asia specialist to brief Tillerson.

“He was not well prepared. Transitions are messy, but this was especially chaotic,’’ said the expert, who asked not to be named.

In the hearing, Tillerson said that China’s activities in the South China Sea —

where it is building up remote reefs and deploying military assets in areas also claimed by other countries — were tantamount to Russia’s 2014 annexation of the Crimea peninsula from Ukraine.

“You’re going to have to send China a clear signal that first, the island building stops, and second, your access to those islands is also not going to be allowed,” he said.”

This is insanity of the highest order.

““As a practical matter, we don’t have the maritime power to set up a blockade in the South China Sea,’’

said Carl Baker, a former Air Force officer and policy analyst based in Honolulu with the Pacific Forum CSIS.

“A problem like the South China Sea requires some finesse and careful thinking.’’

“I’m convinced that Tillerson did not state clearly what he meant to say,”

said Bonnie Glaser, senior advisor for Asia at the Center for Strategic and International Studies.

“I think it is really in the interest of the Trump administration to clarify what he meant.”

Gaffe or not, policy experts believe that the Trump administration plans a more [aggressive] approach to China.

said Joshua Kurlantzick, a Southeast Asia specialist at the Council on Foreign Relations.

“I think it’s probably a shot across the bow, and that they are planning other very assertive actions in the South China Sea.”

Among the more hawkish ideas that have been considered, he said, are more regular movements of U.S. warships in the South China Sea, and in closer proximity to Chinese naval formations.

It has even been suggested that the United States could build floating bases in the South China Sea — essentially a U.S. version of what China is doing.

If the bumps during the transition period before a Trump administration begins Jan. 20 are any indication, relations with China could be contentious.

Trump angered Beijing early on by taking a telephone call with Taiwan’s president, Tsai Ing-wen, in a break with diplomatic protocol,

and later by questioning the “one China” policy, which essentially recognizes that Taiwan is part of China.

“As Trump has yet to be sworn in, China has shown restraint whenever his team members expressed radical views,” the Global Times wrote in Thursday’s editorial.

“But the U.S. should not be misled into thinking that Beijing will be fearful of their threats.””

We’ve also noted that — due to the equally mis-begotten US invasion of Iraq — Karl Rove and Dick Cheney essentially destroyed the deterrent power of the US military.

Indeed, they made true the Chinese slogan of the Vietnam War era that the US was a “paper tiger” — even tho that characterization was ludicrous at the time.

If Trump and Tillerson keep shooting their un-informed mouths off about taking military action in the South China Sea,