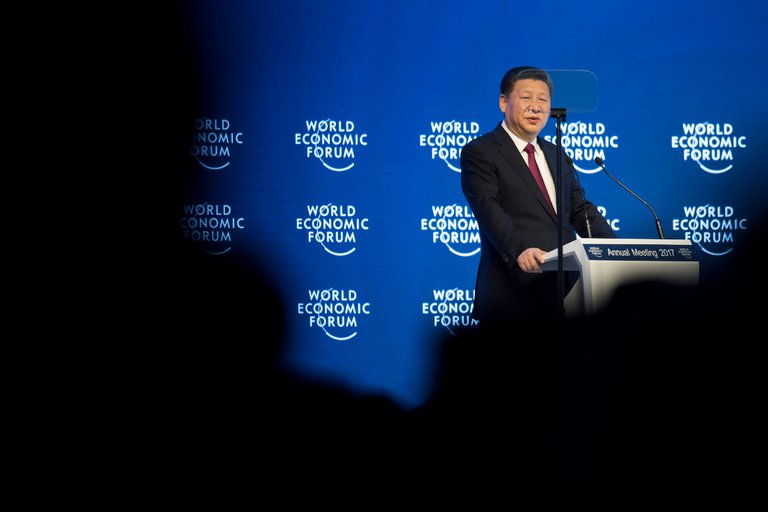 While Trump and Brexit push towards economic closure and disruption, President Xi Jinping takes advantage of the opportunity at the World Economic Forum in Davos to reject protectionism and position China as the leader of an open integrated world economy.

“In a world troubled by grave uncertainties over the basics governing trade, security and the mission to limit climate change,

President Xi Jinping of China on Tuesday portrayed his nation as a responsible global citizen dedicated to furthering international integration.

That a leader of the People’s Republic of China can stake a claim to the mantle of leadership in the realm of free trade speaks to the unforeseen, even surreal alteration of the global order in recent months.

His message, delivered in the Swiss Alps at the annual gathering of the World Economic Forum, appeared meticulously timed to the tumultuous moment at hand.

He was speaking three days before Trump was to be inaugurated president of the United States, raising the prospect of a trade war with China,

and on the same day that Prime Minister Theresa May of Britain outlined plans to pursue her country’s departure from the European Union.

The Chinese leader used his moment to make an expansive case for globalization as a source of prosperity.

He never mentioned Trump by name, nor did he even make reference to the fact that the White House is about to gain a new occupant.

not least, his repeated threat of steep tariffs on Chinese goods as a response to what he portrays as predatory trade practices.

“Pursuing protectionism is just like locking oneself in a dark room,” the Chinese president declared. “While wind and rain may be kept outside, so are light and air. No one will emerge as a winner in a trade war.”

The populist ferment refashioning the global order has made previously unthinkable roles possible.

In the United States, the supposed citadel of free market enterprise, a wealthy real estate magnate has captured the White House on the strength of his appeal as a supposed champion of blue-collar workers.

In Davos, where technology executives fret about the plight of sub-Saharan Africa while drinking champagne paid for by investment banks,

That Xi chose this year to make his debut underscores China’s attempt to improve its international standing just as much of the world appears in turmoil.

The United States is about to inaugurate as president someone who has questioned the relevance of powerful institutions that have anchored the world order for decades, from NATO to the World Trade Organization.

Britain is pursuing a fraught divorce from the European Union, dealing a blow to those who have advanced regional integration as a solution to economic and security problems.

The growing electoral strength of populist, anti-European Union parties in France, the Netherlands, Italy and Germany have intensified fears the union may not endure.

These developments have yielded a gnawing sense that a complex world is suddenly short of adult supervision.

Xi devoted his speech to trying to fill that vacuum, casting China as a trustworthy power

in which serious-minded people are taking considered action to address consequential challenges — from climate change to a weak global economy.

“This appears to be a time of uncertainty in the United States, in the U.K.,”

“The world needs strong leaders to give the world confidence.”

In keeping with the traditions of speeches delivered by senior Chinese officials, Xi’s address was long on platitudes, tortured metaphors and literary references, while nearly bereft of policy pronouncements.

Yet, in totality, it delivered a striking message:

In an era in which the United States and Britain are consumed with recriminations over the strains of globalization,

China will continue to tether its fortunes to world trade.

In an implicit rebuke of Trump, the Chinese president argued forcefully for follow-through on the 2015 Paris climate accord.

Trump has threatened to renounce the deal while naming to his cabinet several people who question the basic scientific consensus on climate change.

“All signatories should stick to it instead of walking away from it, as this is a responsibility we must assume for future generations.”

Xi was accompanied by an enormous delegation of Chinese officials and business executives, who reveled in a moment on the world stage, posing for photos as they awaited the president’s arrival.

In conversations on the sidelines, many expressed concerns about the threats of tariffs from the incoming Trump administration, fearing the consequences of a potential trade war between the world’s two largest economies.

But most assumed tough rhetoric would eventually give way to the realities of shared commercial interests.

China relies on access to the United States, the largest consumer market on earth, as the landing place for its exports.

The United States depends upon China for a vast range of finished goods.

“I don’t think it will happen,” he said of the hostilities. “It’s going to be a disaster if it does” … “

Indeed, it will be …