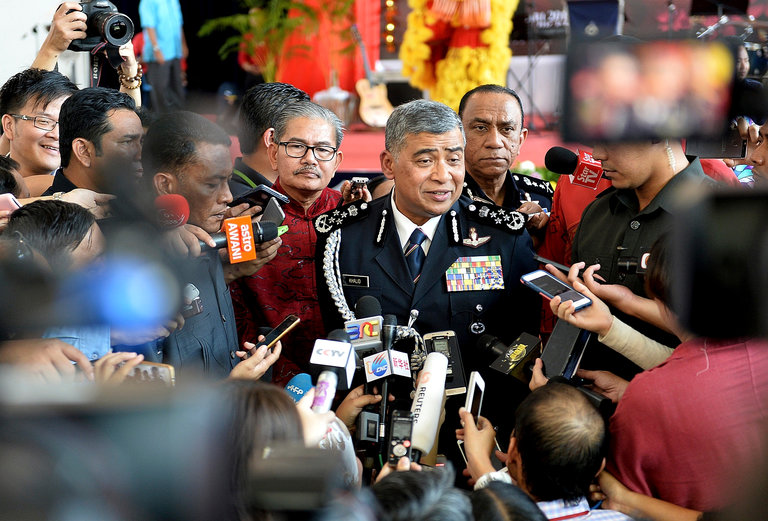 Malaysian police said VX, listed as a chemical weapon, had been identified from samples taken from the North Korean leader’s estranged half brother. It is tasteless & odorless, and can be delivered in two compounds, mixed at the last moment, to create a lethal dose. 10 milligrams is enough to kill by skin contact. North Korea is said to be among the world’s largest possessors of such weapons. Here, Khalid Abu Bakar, Malaysia’s national police chief, speaking to reporters in Kuala Lumpur on Thursday.

The poison used to kill Kim Jong-nam, the half brother of the North Korean leader Kim Jong-un, was VX nerve agent, which is listed as a chemical weapon,

the substance was listed as a chemical weapon under the Chemical Weapons Conventions of 1997 and 2005,

to which North Korea is not a party.

South Korea has said the killing was the work of the North Korean government.

raises the stakes over how Malaysia and the international community will respond.

VX nerve agent can be delivered in two compounds that are mixed at the last moment to create a lethal dose.

The police say that two women approached Kim at the airport with the poison on their hands and rubbed it on his face, one after the other.

Samples were taken from Kim’s skin and eyes.

The poison was identified in a preliminary analysis by the Center for Chemical Weapons Analysis of the Chemistry Department of Malaysia, Khalid said.

The Chemical Weapons Convention bans the use and stockpiling of chemical weapons,

and North Korea is among the world’s largest possessors of such weapons.

and had a capacity to produce a variety of biological weapons.

The North has also conducted five nuclear tests since 2006.

VX is part of a family of nerve agents created decades ago during research into pesticides.

It is tasteless and odorless and kills by causing uncontrollable muscle contractions, which eventually stop the victim from breathing.

A dose of about 10 milligrams is enough to kill by skin contact, according to the Federation of American Scientists.

Several world powers, including the US and the former Soviet Union, once had large stockpiles of the nerve agent.

American stores of VX were destroyed under the Chemical Weapons Convention of 1997, with incineration completed in 2012.

In 1994 and 1995, the Japanese cult Aum Shinrikyo used homemade VX to attack three people, one of whom died.

It is widely reported to possess a large arsenal of chemical weapons, including mustard, phosgene and sarin gas,

The announcement by Malaysia’s police chief came just a day after North Korea denied any responsibility for Kim’s death,

accusing the Malaysian authorities of fabricating evidence of Pyongyang’s involvement under the influence of South Korea.

With the North’s reclusive government on the defensive

about the Feb 13 killing of Kim, the estranged half brother of Kim Jong-un, at the airport for the Malaysian capital, Kuala Lumpur,

a statement attributed to the North Korean Jurists Committee said

the greatest share of responsibility for the death “rests with the government of Malaysia” because Kim Jong-nam died there.

And in what could be seen as a threat to Malaysia, the statement noted that North Korea is a “nuclear weapons state.”

But in a case that has been filled with mysteries and odd plot twists,

North Korea still would not acknowledge that the man killed was indeed Kim Jong-nam.

North Korea has called for the release of the three people —

Ms. Huong, an Indonesian woman, and a North Korean man

who are being held by Malaysia in connection with Kim’s death.

The statement on Thursday from the Jurists Committee was cited by the state-run Korean Central News Agency,

in the first comment on the killing from the North’s official news media.

that proved that its investigators “intended to frame us.”

It said Malaysia had done so under South Korean influence …

Relatives and acquaintances of the two women Malaysia has accused of carrying out the killing,

by applying poison to Kim-Jong-nam’s face as North Korean agents looked on,

insisted they must have been duped into doing so,

though the Malaysian authorities say otherwise.

“I don’t believe Huong did such a thing,” said Doan Van Thanh, father of Doan Thi Huong, 28, a Vietnamese woman being held in Malaysia.

“She was a very timid girl. When she saw a rat or frog, she would scream.”

Thanh, 63, said he had seen little of his daughter recently.

He said she left the family’s home, in a village south of Hanoi, at 17 to attend community college, where she studied to be a pharmacist.

She later left Vietnam to work in Malaysia without telling her family and rarely visited, Thanh said.

When she returned home in January for the Tet holiday, he said, she stayed only a few days.

On Thursday in Nghia Binh, Ms. Huong’s hometown, her brother, Doan Van Binh, said that she posted on Facebook under the alias Ruby Ruby.

Her Facebook photographs and the attached location information appear to show that she had visited Malaysia twice since January,

and her Facebook friends include several people who write in Korean.

Binh said that Huong had also appeared in a singing contest on the television show “Vietnam Idol” in 2016.

In a short video clip, a panel of judges rejected Ms. Huong after she sang just one line: “I want to stop breathing gloriously so that the loving memory will not fade” …