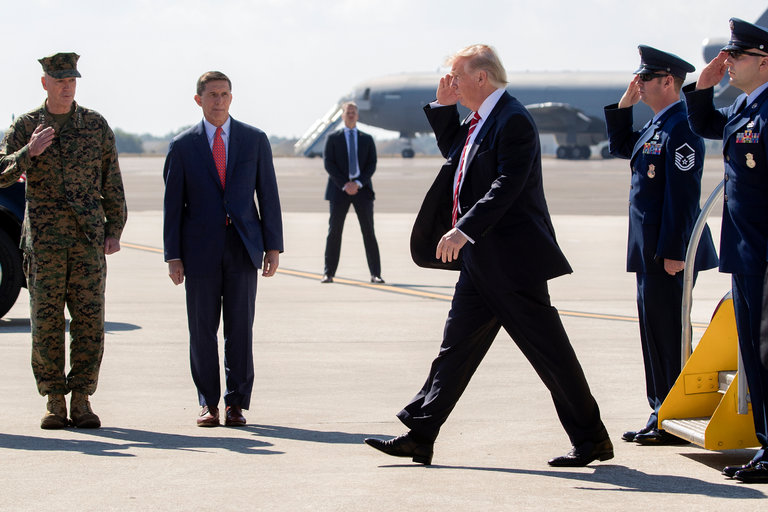 The farcical demise of Michael Flynn has seriously weakened the credibility of Steve Bannon and the rest of the white supremacist clique in the Trump “white” house. While Americans don’t seem to see the connection, the Russians certainly do. Top, Bannon and Flynn with Trump in Oval Office during infamous phone call with Australian Premier Turnbull. Below, Trump and Flynn in happier days — this past weekend …

At this point, beyond the realization that the whole “Siberian candidate” drama is far from over,

no one has any idea how the forced resignation of Michael Flynn as head of the National Security Council is going to play out.

Will the Democrats be able to get Jefferson Beauregard Sessions to recuse himself,

given his blatantly sycophantic attitude towards Donald Trump ???

Unlikely … indeed, it’s fast becoming obvious that the Democrats aren’t going to be much of a force at all, at least for the next two years,

and, given their evident confusion and the number of Senate seats they have to defend in 2018, most likely the next four …

Trump and his cronies were literally colluding with Putin throughout the Presidential election campaign season ???

Maybe … but also unlikely, given that, predictably, Trump has already made clear he has totally bought into the whole Pence / Ryan / mainstream RPB agenda,

with insulting and demeaning cabinet choices like Tom Price and Betsy Devos, whose corruption is as painfully obvious as the Democrats’ weakness,

and the economically dysfunctional and morally horrifying tax proposals that are bound to be forthcoming in the disturbingly near future.

And it’s not even yet apparent where the US / Russia relationship is going to go,

of a 1987 arms-control treaty, negotiated under the auspices of Reagan and Gorbachev,

that explicitly forbids both the US and Russia from deploying intermediate-range land-based cruise missiles.

Indeed, the only thing that is in any way clear, at least at the moment, is that Flynn’s departure —

The reason — as we have said many times — is that Putin’s Russia is NOT Gorbachev’s Soviet Union … or even Yeltsin’s Russia.

Rather, in the eyes of Bannon and his white “nationalist” pals,

to the neo-Nazi wonderland promoted by Italian “philosopher” Julius Evola.

It is certainly true that, among mainstream Republicans, anti-Russia sentiment is a continuation of their Cold War era anti-Sovietism.

But the truth of the matter is that, as Bannon and his friends correctly understand,

as Putin’s other boy-toy in Team Trump — to this point absent Secretary of State Rex Tillerson — would also tell them.

In any event, even if Americans don’t realize this, the Russians certainly do, as detailed in this piece by the estimable Neil MacFarquahar in the New York Times …

“The champagne toasts that some Russian officials quaffed just a few short months ago to celebrate the victory of Donald J. Trump have gone a bit flat.

That cemented the uneasy mood.

the latest in a series of mixed signals from Trump and his advisers on a host of issues important to Russia,

particularly the lifting of economic sanctions.

Now, many prominent political figures are wondering whether hopes for change were premature,

and whether Moscow will inevitably remain Washington’s main boogeyman.

On Tuesday, the Pentagon was confrontational, accusing Moscow of

secretly deploying a cruise missile system that violates a 1987 treaty on intermediate-range missiles based on land.

this week issued one of the most negative public assessments yet of Trump.

“Don’t be charmed by Trump,” he said in a message he addressed to all politicians and experts.

“Don’t think that Trump is a pro-Russian politician.

Don’t hope that Trump, in the interests of Russia, will in any way go against the basic, rooted interests of America.”

How things have changed since November, when the Russian Parliament greeted Trump’s election with a round of applause

and a prominent political leader — albeit one famous for his antics — toasted the victory with champagne on national television.

knocking the Russian leader from the top spot for the first time since 2011.

And he was never publicly celebratory, although his animosity toward Hillary Clinton,

whom he blamed for the angry demonstrations that greeted his return to the presidency in 2012, was well known.

In recent years, Putin’s main foreign policy goal has been to resurrect the time when the US and the Soviet Union, as the two great nuclear superpowers, were the main arbitrators of the global order.

Lacking the might of the Soviet Union, Putin has tried to punch above his weight by shocking the world with unexpected tactics like

President Barack Obama responded by referring to Russia as a declining regional power.

The two men had a poisonous personal relationship.

Trump seemed to presage a different era with all the praise he heaped on Russia and Putin.

He described him as a strong, smart leader and said that Moscow seemed to be blamed for everything.

And he called for better relations with Moscow to fight the Islamic State and other terrorist groups, echoing a longstanding Putin pitch.

Some voices in Moscow cautioned that Clinton, as a calmer hand on the tiller, would be the kind of predictable leader that the Kremlin preferred, albeit a hostile one.

Now, there is a sense that the Kremlin might be unsettled

by the president of a far more powerful country deploying Putin’s favorite tactic:

“Trump will be tamed and act more presidential, eventually, but he also has a penchant for unpredictability that works against the Kremlin,”

“This creates a situation in which a stronger player with the same style of unpredictability as a strategy comes on the stage.

Putin did not anticipate that.”

There has been a certain amount of policy whiplash on issues important to Russia.

First, Trump said that NATO was obsolete, then that it had America’s solid backing.

He seemed to indicate he would lift economic sanctions imposed over the Ukraine crisis,

and appointed as secretary of state Rex W. Tillerson,

who as head of Exxon Mobil cut enormous oil deals with Russia and spoke out publicly against sanctions.

Then the new US ambassador to the UN, Nikki R. Haley, sharply criticized Russia over Ukraine,

suggesting that sanctions were hinged to a peace deal there.

He said maybe sanctions could be lifted in exchange for a better deal on nuclear arms.

The Trump administration seemed to want the Kremlin to distance itself from Iran, its ally in Syria, and from China.

“There is a cautious feeling about how Trump and his advisers designated the possible ways of improving relations with Russia,”

“This has frightened the Kremlin because it does not correspond to Russia’s interests.”

Articles have just begun to appear in the Russian news media questioning the need for improved ties with Washington.

Sergei A. Karaganov, a prominent political scientist perceived as close to the Kremlin, wrote that

Russia’s foreign policy was a success and that it should stay the course.

He did not even mention Trump.

Fyodor Lukyanov, another establishment voice, wrote that Moscow risked alienating a host of new important friends if it drew too close to Washington.

On Monday, one of the first op-ed articles depicting Trump as erratic appeared in Moskovsky Komsomolets, a popular tabloid.

so who could guarantee that his policy toward Russia would be consistent?

The idea that Flynn was forced to resign over contacts with the Russian ambassador, Sergey I. Kislyak,

fed the suspicion that relations with Moscow were the main target and that Russophobia was again stalking Washington.

Accusations that Russia interfered in the American elections have generally been dismissed on these grounds.

Since Trump’s victory there has also been a quiet drumbeat in Moscow,

where conspiracy theories are never far below the surface,

that the American establishment would overthrow him.

“Either Trump has not found the necessary independence and has been driven into a corner,”

wrote Konstantin Kosachev, the head of the international affairs committee in the upper house of Parliament.

“Or Russophobia has permeated the new administration from top to bottom.”

Alexei Pushkov, another lawmaker, said on Twitter that after Flynn, Trump himself might be the next target.

Dmitry S. Peskov, the spokesman for Putin, declined to comment on Tuesday about the resignation, calling it an internal American affair.

Just last Friday, in an evident attempt to help Flynn,

Peskov had denied that the American official and Russian ambassador had discussed sanctions.

In resigning, Flynn conceded that they had.

Peskov called it premature to predict the course of Russian-American relations.

when Tillerson MIGHT meet with his Russian counterpart, Sergey V. Lavrov,

on the sidelines of a meeting of foreign ministers from the G-20 countries in Bonn, Germany.

Trump and Putin spoke by telephone in late January, but no meeting is anticipated before this summer.

The Kremlin is expected to spend the coming months trying to tamp down the exaggerated public expectations already focused on that first summit,

“In these circumstances,” he said, “I think what remains for the Kremlin is to sit and wait.””